It’s actually very easy to make the data on a hard drive unrecoverable. 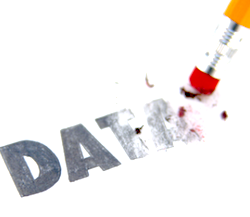 If you intend to use the hard drive again, simply get a program (there are several you can download from the net for free) that overwrites the data on the hard drive with something else, usually a random pattern of data.

The American Department of Defense (DoD) states that data can only be ‘securely’ destroyed if the overwrite process is repeated 7 times. Frankly, this is ludicrous. 30 years ago or so it was theoretically possible to recover data on hard drives which had been overwritten because the ‘fingerprint’ of the old data still existed on the edges of the tracks where the new data was written, but these days, when data is crammed into ever increasingly smaller spaces, one overwrite is all that is needed.

> Did You Know ? > Many people believe that reformatting their hard drive is a good way of to get rid of data. It isn’t. A reformat simply ‘resets’ the hard drive without removing the data that was on it previously. 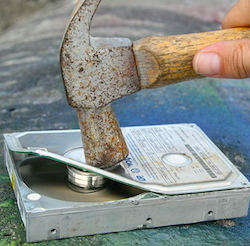 There are two types of hard drives: the older ‘HDD type’ which are mechanical devices that store data magnetically on a rotating platters, and the newer ‘SSD type’ which store data on memory chips and have no moving parts. In both cases the best way to destroy the drive and the data on it is to smash the hard drive with a hammer.

Data Clinic have been involved with many cases where we’ve been asked to recover the data from deliberately damaged hard drives, computer tablets and mobile phones. We’ve successfully got data back from devices that have been in fires, underwater, smashed against tables, thrown out of windows and hit hard against pavements.

It’s not physically possible to recover data from devices smashed with a hammer.

Data Clinic Ltd
4.5
Based on 108 reviews
Write a review

Sonia Emmett
16:04 01 Mar 21
Data clinic were amazing from start to finish, they were very helpful and quick with retrieving my data from my iPhone 5 that suddenly stopped working, that also was not backed up as I was not aware I had run out of memory, everything came back on a memory stick and my phone was still in working order, although I bought a new one but will keep iPhone 5 as a spare. The whole process was turned round within a week, well worth the money I paid and I have recommended them to everyone. Great service guys and thank you so much ...