For many of us, the smartphone and tablet is now more widely used than desktop and laptop computers, with over 50% of internet searches now being conducted from a mobile device rather than a desktop or laptop computer. The Sony Xperia range includes smart phones and tablets – both are very popular and as such we see many that suffer accidents and come in for recovery and repair.

A Sony Xperia holds a huge amount of data including

There are many reasons why a phone or tablet stops working, in nearly all cases we are able to recover the data you can no longer access. This is true even if you device is completely dead and is unresponsive.

In addition to recovering the data from damaged or broken Xperia phone and tablets we can also recover data that has been deleted, accidentally or deliberately. Perhaps there’s a movie or some contact information that have been deleted by mistake? Or perhaps you inadvertently deleted a photo gallery? Providing this data has not been overwritten in the meantime, we can usually get it back. Retrieving deleted data such as SMS text messages or WhatsApp conversations is very common in phone investigation cases when the messages are often part of a legal case.

Why Choose Us To Recover Your Xperia ? 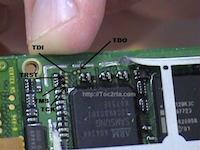 We use advanced techniques of data extraction such a JTAG (above) and Chip-Off to recover the data from Sony Xperia phones and tablets.

With local recovery centre’s around the country including London, Manchester and Glasgow, we offer a free collection service or go here to find our local regional centres.

Need To Recover The Data From Your Xperia Phone or Tablet ?

Then call us now on the number above, or fill out the form to your right and we’ll contact you.

Data Clinic Ltd - Manchester
4.5
Based on 144 reviews
See all reviewsWrite a review

jack stockdale
16:43 11 Jul 22
Fantastic service; plenty of communication, quick turnaround and perfect end result. A very smooth, pleasant and personable experience, that achieved the exact results I was after. Would absolutely recommend