Dell’s popular Poweredge servers are available in 3 distinct types of model – Tower Servers (all with the letter T in their model name), Rackmount (with the letter R), and Blade (with the letter B). Recently Dell have announced an additional C line of servers, denoting high performance.

Dell servers are capable of running many different levels of RAID including RAID 5, 6, 10 and 50. All Dell systems are built on x86 architecture and use Intel Xeon or AMD Opteron processors that support Windows and Linux. PowerEdge servers also support VMware, Microsoft Hyper-V and Citrix XenServer hypervisors.

Types of Failure on Dell Servers

Since our inception in 2002 we’ve seen many types of failure on Dell servers. Some of the most common ones include: 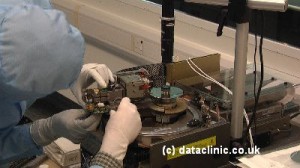 Data held on any server is typically very important, so it’s imperative that any problems are dealt with correctly to avoid data loss. Dell’s use of RAID topologies makes this task more complicated as the data from each file is distributed across all the disks in a server rather than being held on just one drive. So before each file can be recovered, the server’s RAID configuration has to be correctly worked out before we can begin to piece the data back together.

Because the data held on servers can often be so crucial, it’s not uncommon for people to start to panic if a problem arises and access to their data is lost. If you find yourself in this situation you will find our RAID / Server Failure? – The Top 5 Things to Avoid very useful – it tells you the most important things you should not do and why you shouldn’t do them when your Dell system fails.

Our Dell data recovery service has been in operation since 2002 and covers the whole of the UK. In this time we’ve seen hundreds of Dell servers systems with all sorts of failures. We can nearly always help when things go wrong and we offer 3 different types of data recovery service level –