A head crash is caused when the hard drive’s read / write heads ‘crash’ into the surface of the rotating platter beneath them. In many cases, a head crash means the death of the hard drive and the data on it as the damage caused is frequently too severe for any type of data recovery to be possible. 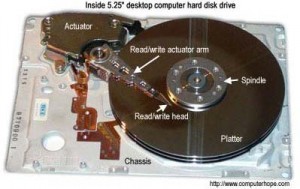 Ok, so let’s break that down further… Take a look at the picture of an opened hard drive to your right.

Inside your hard drive, your data is stored as a series of 0’s and 1’s on several circular platters. These platters rotate around a spindle at very high speeds – often between 7200 and 15000 RPM. The data is read from and written to the hard drive by it’s read/write heads which are located at the tip of the actuator arm. This arm moves backwards and forwards across the surface of the hard drive hovering a few hundredths of a millimetre above the platter as it reads and writes your files and data to and from the hard drive.

How Do Head Crashes Happen ? 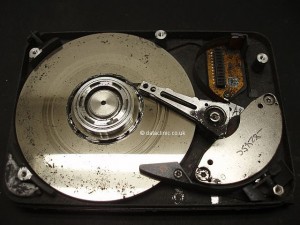 An example of a severe head crash. Notice the platter debris – there is zero chance of data recovery on this drive.

Hard drives that work in machines that are not moved, such as desktop computers, hardly ever suffer head crashes. Portable hard drives that rest by people’s feet or on tables can be easily knocked over or onto the floor – in these incidents, a head crash is possible.

A head crash often causes catastrophic damage to a hard drive – all you need to imagine is lowering something metallic onto a circular disk that is spinning at thousands of rotations per minute. Even the slightest impact is going to cause significant damage – sending platter debris across the surface.

The three most popular causes of head crashes:

Is Data Recoverable After A Head Crash ? 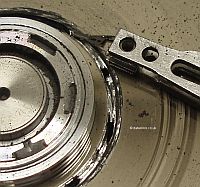 Close up of a hard drive head crash

Back in the noughties (2000-2010), head crashed hard drives were often unrecoverable as platter surfaces were too damaged to attempt any sort of data recovery, but since the advent of Active Hard Drive Protection (AHDP) systems, many hard drives are now smart enough to detect when they are falling and will make attempts to protect themselves from a head crash by moving their actuator arm and read/write heads away from the platter surface before impact – thus removing the possibility of a head crash.

Nearly every type of portable hard drive now has AHDP as standard, but a heavy fall or knock still significantly damages the drive. Now though, the damage is usually localised to the hard drive’s read/write heads and not the platter surface. Drives damaged in this way will not be recognised by a computer and will emit a repetitive ticking sound when first powered on. The good news is that providing the data recovery company knows what they are doing and are able to source a suitable donor hard drive to replace the broken components in the damaged drive, the data on these hard drives is nearly always recoverable.