This week we provide help and advice to the owner of a vandalised CCTV system who was burgled. 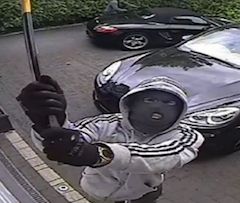 I need to recover data from a hard-disk drive from a desktop PC CCTV system which was damaged by vandals. Certainly there appears to have been physical damage done to it. The drive has not been spun-up since to preserve as much as possible. Seagate Barracuda 7200.12 3.5″ 250GB – ST3250318AS – P/N: 9SL131-021. Firmware HP34. If possible I’d prefer if possible to drop it off in Glasgow or Edinburgh (I’m based in Livingston) instead of posting it anywhere.

Advice for Owners of Vandalised CCTV

Unfortunately damage to CCTV systems is quite prevalent during burglaries and we occasionally receive vandalised CCTV systems that are sent to us for data recovery. CCTV recording systems are usually located inside the building being robbed so, the logic goes: destroy the CCTV hard disks and you destroy the recorded evidence of the crime. If sufficient damage is done to a CCTV hard disk, the data on it will not be recoverable, but on modern hard drives this damage has to be quite considerable and it’s frequently possible for us to recover CCTV information.
Tip: When installing CCTV, we recommend that high spec cameras are used to stream the information they record to offsite servers via the internet, rather than record the information to an on-site hard disk.

Now that we’ve got the CCTV advice out of the way, back to the problem with your hard disk. You haven’t specified the type of damage done so I recommend bringing the hard drive into our Glasgow office so we can take a closer look. The extent of the damage will determine whether it’s possible or not to recover your data. Other Data Clinic locations can be found here.

Typically we’ll need to have your hard disk for between 5 – 10 working days in order to retrieve the data from it. The actual number of days required will depend on the complexity of the problem. CCTV hard drives have usually been dropped or hit hard with something, so the type of damage caused to the hard disk is often physical. The casing is usually damaged but because it is so robust it’s rare for the lid of the hard drive to have been removed. Recovering the data usually entails stripping the hard drive down to identify the damaged components, before replacing them and rebuilding and recalibrating the drive.

Data Clinic’s Glasgow office is located on Woodside Place in the city centre and handles all the data recovery work throughout Scotland. You are welcome to call in with your hard-disk, or we operate a free collection service that covers the whole of Scotland. Simply tell us where you’d like the hard-disk collected from and we’ll do the rest.