In this data recovery help and advice post we look at 3 common problems with hard drives and advise you what to do if you have a similar problem. 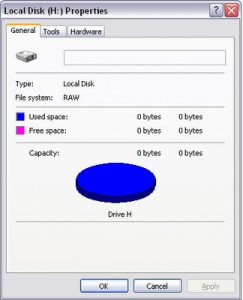 Question: My hard disk file system is showing as RAW and the device is not recognised by the PC. The drive was supposedly almost full when the corruption occurred, however I’m not sure what has happened to cause it.

Please note, RAW data corruptions like this are nothing to do with the RAW image files created by some cameras.

Question: Our hard drive was accidentally knocked off a table, and now it won’t connect to any of our PC’s. It turns on, and sounds like its working, but the PC can’t recognise or pick up the hard drive.

Oh dear! This is actually a very common problem. External hard drives are forever being knocked over or dropped. When the impact is severe enough, damage to the hard drive’s read / write heads occur – the result is the ticking noise you hear when the hard drive is subsequently powered on. The fall has caused physical damage to the read / write heads and to extract the data from the hard drive it’s now necessary to remove these and replace them with a compatible spare part. If the data on your hard drive is valuable, don’t be tempted to try this yourself as you’ll damage the hard drive beyond repair. Instead contact us for advice or call in at one of our local data recovery centres throughout the UK. We’ve centre’s in London, Birmingham, Manchester and Glasgow, and if the hard drive hasn’t been opened before it gets to us, we’ll diagnose it for free and tell you a price for the data recovery. 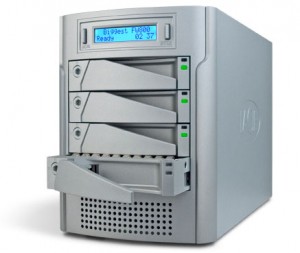 Question: There was a power cut last night. When we came to work this morning our LaCie Biggest FW800 will not power up / turn on. I have changed the fuse in the plug to no affect. Can this be repaired? If it cannot be repaired, can the data be recovered?

These Lacie NAS hard drives contain 4 disks and can be used in a RAID format, such as RAID 5. If a storage system uses RAID 5 it’s important to understand that the data is not held in the same way as it would be if the system were just a single hard drive. Instead of whole files being stored on the disk they are divided into separate pieces are stored across the 4 disks. Therefore it’s not possible to recover a file from just one drive, the file has to be recovered from all the drives minus 1 that file is stored on. Hence to recover files from this 4 disk Biggest FW800 we will need to access at least 3 of the hard drives to be successful. Use the following links to read more about our RAID data recovery and NAS data recovery services.

It should be possible to recover the data from this system. I suspect the system was powered on when the power cut occurred and this has resulted in some subsequent data corruption. There may also be a fault with the motherboard but this will not hamper the data recovery as all we require are the hard drives.