The previous section highlighted the main ways in which hard disk failure and data corruption can occur. The following section details some possible preventative measures and courses of action to take with regards to hard disk failure: 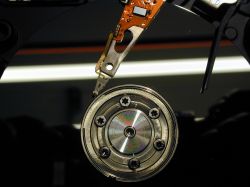 Sometimes it may seem like the hard disk does not spin. This could be because the heads have become ‘glued’ to the platters; this is quite common in particular in older hard disks. If this happens, turning the computer on and off a few times can often fix the problem. Alternatively the hard disk may appear to stop running all of a sudden. If this is the case it could be a problem with the power connector or it could be more of a serious malfunction. It is therefore a good idea to check all the equipment and it may so be required that a new hard disk is required.

This essay has highlighted, first of all the need and importance of computers in today’s society and how there is an increased pressure and stress placed computers from an architectural perspective to store huge amounts of data. The advances in technology mean that the capabilities of computer hard drives are increasing both in terms of speed and storage capacity, but these technological advances cannot unfortunately eradicate the possibility for hard disk failure, which is ultimately inevitable.

The benefit is that hard disk failures can be avoided as much as possible though a good knowledge of how they work (i.e. knowing that they will need replacing after a few years of use) and taking care and caution in using them. Furthermore, the majority of hard disk failures do not automatically result in a complete data loss, often the information can be recovered by making the necessary repair or by taking quick action on the fault. Alternatively, it is not possible to completely prevent hard disk failures from occurring and in the case of severe failures such as a head crash data can be rendered completely unrecoverable. Finally, although this can result in what might be deemed as a disaster, backing up data or taking the precautions of configuring the hard drive (e.g. RAID mirror configuration) reduces the impact of the hindrance that such a failure can cause.