Synology are popular manufacturers of NAS storage equipment. Synology DiskStation and RackStation NAS devices are generally easy to use and available in a number of different RAID configurations including RAID 0, RAID 1, RAID 5, RAID 6 and RAID 10. DiskStations and RackStations also support SHR and SHR-2 storage configurations. Whether your Synology NAS uses a standard RAID or is a Synology Hybrid RAID config makes no difference, we recover the data from both. 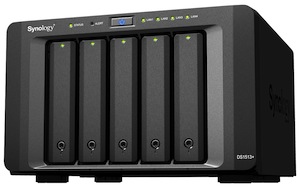 Synology DiskStations and RackStations can develop a variety of problems that will prevent data access and may cause data loss. In failure circumstances the main rule is not to panic. Doing the wrong thing at this point will often lead to permanent data loss, so we’ve written a special page listing the 5 main things you should avoid doing if you have a failed Synology NAS / Server / RAID.

1. Hard Drive Failure – One or more of the hard drives in the Synology device will failure. In most cases this will mean the data can no longer be accessed. Disk failure needs to be treated carefully as files and folders can easily be lost in these situtaions.

2. Dropped / Knocked NAS – Often kept on the floor or on a table, it’s easy to knock over a NAS. Sometimes no harm is done but at other times, the NAS will fail to be recognised and a buzzing or ticking noise coming from it will be heard. This is a typical symptom of a mechanical hard drive failure. The data should be recoverable, but the hard drive will need our attention inside a cleanroom first.

3. Configuration Issues – NAS / Server / RAID configs can easily be lost due to power cuts or other unforeseen events. This can sometimes also cause data loss or corruption.

Recovering data from a Synology NAS:

As with any NAS, getting your data back isn’t as easy as it may sound. As you’ve read above, the complexity of RAID and NAS configurations make if difficult to recover data. However, we’ve been successfully recovering data since 2002, so please, if you have a problem with you Synology equipment get in touch on 0871 977 2525, we’ll be able to help.