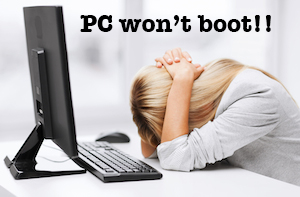 In this post we examine various hard drive problems encountered when booting a Windows PC and offer advice on how to copy the data off to another hard drive. Here is the user’s enquiry:

“PC is 2007 bought from new. It’s an Advent with a 250gb hard drive. Worked fine shut down last week, turned on 2 days later Windows wouldn’t boot up, or go into safe mode, all auto repairs didn’t work. Used the back up made on purchase to boot from cd rom. tried all 4 repairs options from the menu. did a bcd backup command bootrec and tried to fix by following instructions online.

Nothing worked and following the change no longer would f8 safe menu appear. HDD is showing in Bios and on start up. Tried another repair in command prompt to use the diskpart menus. was told to make a partition active, was one OEM file and 2 primary partitions. the 3rd partition wasnt active, i made this active and re started pc. Since i did this the f8 safe mode menu has appeared again if booted from hard disk, but doesn’t actually work. A system32 config error comes up with all options. The worse thing though, now the boot cd wont boot to the menu screen, it loads windows files, then stops turning, all i get now since making the partition active is white cursor so cannot get into prompt to make more commands now so i’m completely stuck. Can you help fix this for me. I have user data i need to get from the disk, but would like to know if its even a hard disk issue. i seem to have made matters worse because cant use a disk now to get anywhere.”

Hi and thanks for your enquiry – to answer your question, yes it is a hard disk issue. When a PC encounters boot problems it will go through a chain of procedures in order to try and boot the PC. 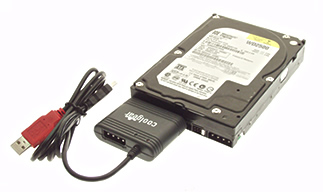 The older the hard drive, the more common bad sectors become and as your PC is 10 years old, you’ve done extremely well for it to last so long without going wrong.

Once a hard drive starts to develop bad sectors it’s best to change it as bad sectors do not get better, it’s a terminal problem and eventually your hard drive will die. Therefore the best thing to do is to transfer your data to another (newer) hard drive. As your faulty hard drive is also your boot drive, the best (and cheapest) way of getting your data off is to remove the faulty hard drive from the computer and attach it as an external hard drive to another computer. You’ll need a hard drive USB adapter to do this (you can get these from Amazon here). This will circumvent the booting problem (as you’ll be booting from another PC) and your should be able to drag and drop the files you want to save across to the new hard drive.