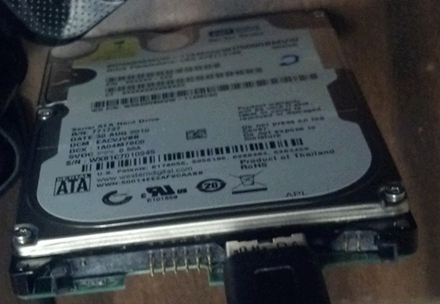 Many of these drives also employ built in encryption which means data is automatically encrypted as it is written to the disk and then decrypted when it is read from the disk. This process is handled by a chip on the hard drive’s motherboard which encrypts/decrypts data as it is transferred between the hard drive and computer.

The Problem With USB

Hard drives that use USB connections on their motherboards rather than the standard SATA connections are a lot more restrictive for data recovery companies to work on as the USB interface will not allow low level access the to hard drives firmware modules if there is damage to the motherboard. This makes operations such as reprogramming parts of the hard drive (necessary when there are password or encryption issues) almost impossible.

It’s first necessary to substitute the damaged USB motherboard for a compatible SATA motherboard and then transfer the adaptive data from the hard drive across. Once completed, we are able to communicate with the hard drive at low level and use the information in the modules to decrypt the data whilst copying it across to a new hard drive.