Read / write heads can become faulty as a result of transient currents that blow out the fuses, or static discharge caused by external contact to the read / write head assembly.

Using in-house signal monitoring equipment, we are able to troubleshoot the disk drives down to the analogue signal level. We can successfully isolate the faults down to the actual read head that has developed a fault and is preventing the drive from initializing.

The procedure by which this is done is directly monitoring the modulated signal from the read heads which goes through a first preamplifier stage. This signal is of a differential nature, meaning it can be positive or negative with respect to the actual magnetic transition on the platter surface from a 0 to a 1 bit. The following figure gives an overview of this signal. 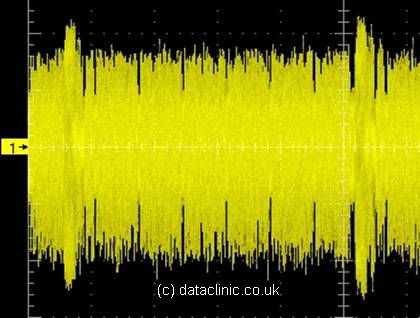 This is the type of signal observed on a healthy drive. There is a regular distribution of the higher amplitude bursts representing the ‘servo window’, and in-between there are very short gaps that represent the sector edges.

This information is used by the drive in order to correctly position the read/write heads on the track centre. As soon as the drive is powered up, the controller will use this servo signal for adjusting the spin speed of the drive, and then moving the heads to the correct track. The figure below shows an isolated servo window and the servo gate signal coming from the disk controller. 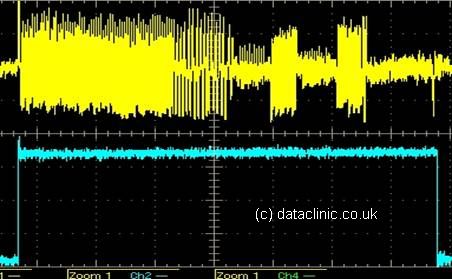 The signal is made up of a fairly constant frequency waveform at the beginning. This is called the servo preamble, and is used for adjusting the amplifier gain. Following this preamble is a set of bursts that represent the servo ID and track positioning bursts. Once this information is complete, the controller switches off the servo gate and switches on the read gate for the sectors to be read back. The following shows the servo gate, and the first read gate.

The controller continues to toggle the read gate for every sector until it anticipates the servo signal and it switches the servo gate on again. The following screen shot displays a sequence of servo and read gate switching. 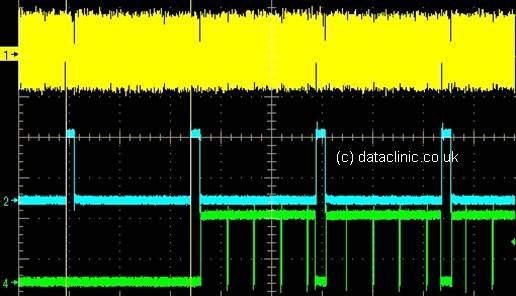 Faulty Drives
When one of the read heads develops a fault, a different waveform is observed. The servo gate is still consistent and is shown in the screen shot below.

This follows the same sequence as a working drive with a preamble followed by the servo bursts. However a noticeable difference is in the read back data sectors. When data is being read from the platters, the heads will be switching between surfaces. Therefore if there is a head which is faulty, the signal will become degraded when reading from this particular head. Likewise, the differential signal will shift from a constant regular waveform, to a waveform with decaying amplitude. This is shown in the following capture.

The green waveform at the top represents the servo gate. As you can see during this period a strong regular pattern is still seen. However in between the servo gates, the data signal is decaying in amplitude. This is caused by switching from a working head, to a faulty head. The same pattern is reversed when switching from a faulty head to a working head, and the signal is seen to move from a small amplitude to a regular signal again. 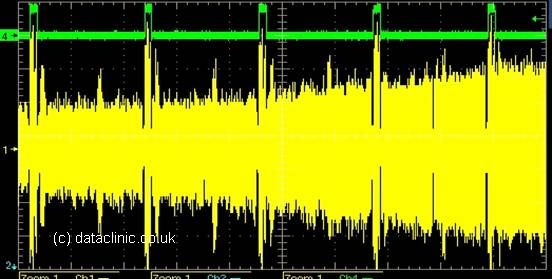 Through the use of advanced high bandwidth test and measuring equipment, a more concise analysis can be undertaken to pin point the exact nature of a fault on a drive. This avoids unnecessary head changes being performed on otherwise operational drives, and a proper diagnostic as to the actual head that has failed.