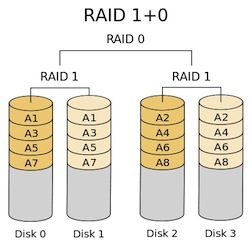 RAID 1+0 is a blend of RAID 1 and RAID 0 setups and requires a minimum of four disks to build. In a RAID1+0 set up, the data is first mirrored across two drives (a RAID 1) and then striped to the other two (a RAID 0). Put the whole thing together and you’ve got a RAID 1+0 (commonly known as a RAID 10). While data striping remains intact for high speed data transfer, data redundancy is assured by the 2 disk RAID 1 mirror.

Many organisations use RAID 1+0 arrays for data intensive applications  – for example, email servers, internet servers and database applications – infect anything that requires a high data throughput.

Whilst RAID 1+0 is an ideal and popular set up in terms of both speed and data redundancy, it’s not a system that you can just plug in and forget. Any system that holds valuable data needs to be looked after and maintained.

Data Clinic Ltd
4.5
Based on 99 reviews
Write a review

Kez Simpson
15:21 25 Nov 20
Very quick turn around. Data was recovered and returned within a week. Staff were friendly and very quick to reply. Highly recommended.

Paul Dodd
13:59 10 Oct 20
Data Clinic managed to retrieve all of my documents, photos and music files off my crashed hard drive. They explained to me at various stages where they were at, they were very quick in finding and retrieving my files. Very reliable company indeed.