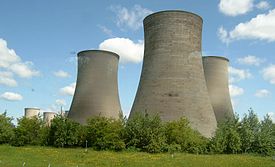 Cooling towers… who builds them? Someone has to, and last week we found out who.

As you know, last week the UK was battered by storms, – gales, driving rain, floods and snow… you name it, we had it. There was much disruption to both homes and businesses.

We were contacted on Thursday by a company that builds cooling towers, their offices had been flooded and their 2 RAID systems were underwater. Their IT provider went into their flooded building to rescue them but it was too late as both servers were underwater.

As anyone who has dealt with floods before will know, flood water is filthy – full of silt, grime and debris. Once we saw the systems we knew that we needed to act fast in order to preserve the data that the hard drives held. So while our customer was throwing out chairs, cupboards and other ruined office equipment we set about cleaning and decontaminating his flood damaged hard drives and preparing them to undergo a data recovery process.

Much of the weekend was spent on this intricate cleaning and drying process until finally we were ready to begin the data recovery process on the Monday. This went smoothy and according to plan – we recovered everything from both RAIDs – something that looked unlikely on the previous Friday when we first say the state of the flood damaged servers.

Data Clinic Ltd
4.5
Based on 107 reviews
Write a review